President George W. Bush, in his January 2002 State of the Union speech delivered only months after the 9/11 attack, famously referred to what he termed the “Axis of Evil”—Iran, Iraq (still under Saddam Hussein) and North Korea. Well, the Axis of Evil has grown over the past 20 years—and changed. And one of those changes is its hold on or access to energy, especially crude oil. Let’s call it the Energy Axis of Evil.

While Bush’s Axis of Evil highlighted rogue states that sponsored terrorism, I include in the Energy Axis of Evil countries that produce and sell crude oil and natural gas to, or buy from, countries when either the seller or buyer are under U.S. or international sanctions. That includes Russia, China, Iran, Venezuela, North Korea, Syria, and Afghanistan, as well as some smaller players.

This black market for oil and gas allows rogue governments—both the sellers and buyers—to continue engaging in political and economic mischief domestically and internationally. China, for example, has been increasingly buying crude oil from sanctioned Iran.

The United States is the largest producer of crude oil in the world, and will likely remain so unless environmentalists and progressives get their way and “cancel” the industry.

Indeed, when looking at the world’s top 10 crude oil producers, five are allies, three are rivals (if not enemies). [See the table]* 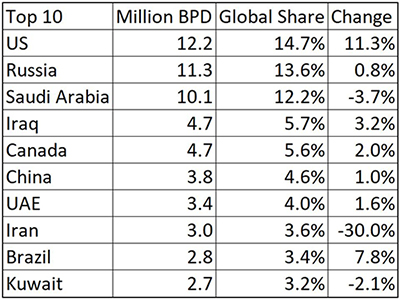 The five allied oil producing countries account for about 39 percent of world oil production. The three Energy Axis of Evil countries—Russia, China and Iran—account for 21.8 percent.

So while the U.S. and its allies have the oil producing lead over the three major Energy Axis of Evil oil producers, that could change if the Biden administration or subsequent progressive administrations succeed in dramatically reducing U.S. oil production.

U.S. oil and natural gas power much of the free world—and the U.S. economy. That production is the only thing that keeps the U.S. from being supplicants to other oil producing countries, as we were before the U.S. shale boom. And it keeps some of those countries (e.g., China) at least somewhat dependent on the United States.

While environmentalists care about reducing carbon dioxide emissions, the Energy Axis of Evil countries care about power—both political and energy-related. And they are willing to use both for nefarious ends. That’s why the United States must remain the world’s oil producing leader.

* I use 2019 production levels since several countries adjusted their production during the 2020 pandemic lockdowns. For example, the U.S. Energy Information Administration says the U.S. accounted for 20 percent of crude oil production in 2020, while Russia and Saudi Arabia supplied just over 10 percent each.