The Inside Story Behind Operation Warp Speed, with Paul Mango 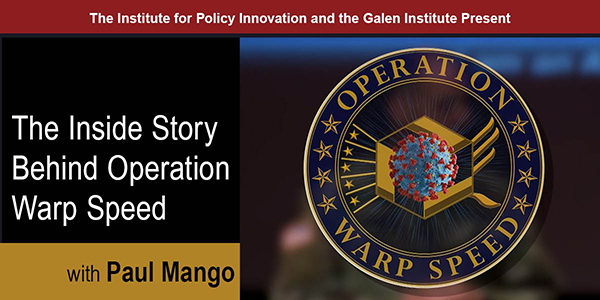 From its inception in May 2020, Operation Warp Speed, which was tasked with facilitating the development of multiple vaccines to address the Covid-19 pandemic, was widely criticized and scorned by the media and the political left. And yet it proved to be one of the most successful, and life-saving, public-private partnerships in history—a fact that even the media now grudging acknowledge.

One of the key people leading Operation Warp Speed was Paul Mango, who was Deputy Chief of Staff for the Department of Health and Human Services from 2019-2021. During this time, he served as Secretary Azar’s formal liaison to Operation Warp Speed, where he was involved in nearly all strategic, operational, and financial aspects of the program, and facilitated its day-to-day activities among the federal agencies.

Mango has now written Warp Speed: Inside the Operation that Beat COVID, The Critics, and The Odds, which will be published in March. In the book he describes how this interagency program was able to provide the strategy, coordination, cooperation and leadership to pull off something that was virtually unheard of—i.e., shepherding brand new vaccines from inception, through development, FDA emergency use authorization, and into the arms of millions of Americans in less than a year.

Please join the Institute for Policy Innovation (IPI) and the Galen Institute on February 16 at 1:00 PM Central (2:00 PM Eastern) as we host author Paul Mango for a virtual policy discussion about Operation Warp Speed and his new book detailing its success.

He received his Bachelor of Science degree in General Engineering from the United States Military Academy at West Point in 1981, where he graduated as a Distinguished Cadet. He received his Master’s in Business Administration from Harvard University in 1988, where he graduated as a Baker Scholar. He also served as a field artillery officer in the United States Army, serving both in the 82nd Airborne Division at Fort Bragg, NC, and the 8th Infantry Division in Germany.

For additional information or questions please contactAddie Crimmins at addie@ipi.org or 512.787.8102