We could pick out item after item in the current form of the reconciliation bill and explain why it is unnecessary, unwise or just plain bad. And we have done so over the past several months.

But today we want to focus on the stunning news that the reconciliation bill now contains some form of removal of the cap on federal deductibility of state and local taxes, which is commonly referred to as the “SALT cap.”

As a result of the 2017 tax reform, taxpayers may deduct no more than $10,000 worth of state and local taxes from their federal taxes. This was a major, long overdue change to the federal tax code which IPI supported.

We’ve explained why capping the SALT deduction is good policy, and why an unlimited federal deduction for state and local taxes effectively subsidizes the high taxes of states like New York, California, Illinois and New Jersey. With an unlimited federal deduction, there is less reason for voters in high tax states to pressure their legislatures to keep taxes at a reasonable level. Essentially, you get all the supposed services from living in a high tax state without incurring the cost because taxpayers in low tax states are subsidizing your state’s high taxes.

And, generally speaking, who pays more than $10,000 in state and local taxes? Upper-income households and especially the wealthy, who pay high sales taxes on their consumption, high property taxes on their large homes, and high state income taxes.

So, in other words, by removing the cap on the SALT deduction, the Democrats are . . . drum roll . . . planning to cut taxes for the wealthy.

Now, of course that is utterly inconsistent with the normal Democrat rhetoric about making the rich pay their fair share. You would have thought it would be Democrats, not Republicans, who would be advocating limitations on SALT deductibility.

But it’s even more amazing than that. According to the Committee for a Responsible Federal Budget (CFRB), by no means a conservative organization, the SALT cap repeal is the LARGEST single line item in the Democrats’ reconciliation bill. Bigger than health care, bigger than childcare, bigger than paid family leave, and bigger than climate initiatives. The biggest line item in the Democrats’ reconciliation bill is a massive tax cut for the wealthy. 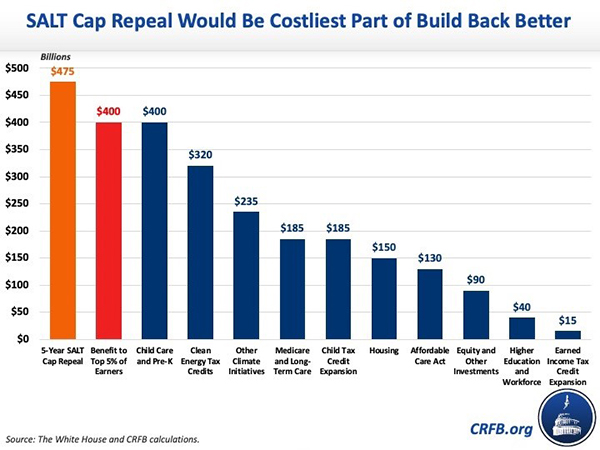 What this tells us is that, contrary to their “working class” rhetoric, the Democrats really are transforming into the party of the wealthy elites. They will spend $15 billion for the working poor, $130 billion on health care, but a whopping $475 billion on a tax cut for the wealthy.

The political ground is shifting before our eyes, and the evidence is not just yesterday’s election results. It’s also in the details of the reconciliation bill.