President-elect Joe Biden has a plan to help thousands of small businesses that are struggling, and often failing, to survive the pandemic: dramatically raise their costs.

Will businesses that survive the pandemic be able to survive Biden’s effort to save them?

The World Economic Forum highlights the number of small U.S. businesses that closed as of September 2020. 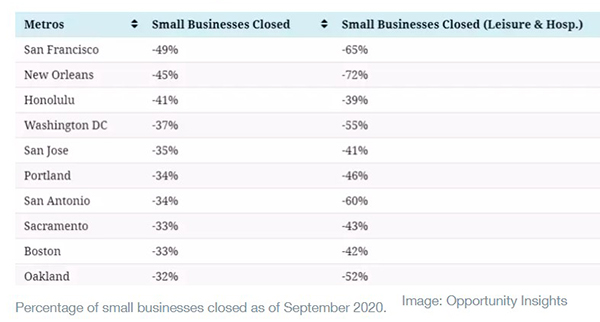 And we’re not through. Fox News reports that 48 percent of small businesses say revenues are below what they need to stay open. So why would any politician, or political party, want to exacerbate those challenges?

In his pandemic relief proposal, Biden is pushing a $15/hour minimum wage—a primary goal of the left.

He didn’t specify a phase-in period, so he could try to get it through Congress in the first days of his administration and have it take effect immediately.

Of course, Congress just passed the $935 billion year-end Covid-19 relief bill that included $325 billion (over 10 years) to help small businesses keep their doors open and workers employed. Another $120 billion was included to extend unemployment benefits for the millions who have lost their jobs.

Ironically, Congress may need to provide even more unemployment benefits if Biden is successful in increasing the minimum wage—because thousands, and perhaps millions, of additional workers could join the unemployment rolls.

According to the Bureau of Labor Statistics (BLS):

But it’s not just the 2.3 percent of the workforce that’s affected by a minimum wage increase.

Workers who are currently making $14.00 and hour—twice that of their minimum-wage coworkers—will want a commensurate increase. Thus a large minimum-wage increase bumps up wages all the way up the pay scale.

The cumulative effect will force thousands of employers, already struggling to stay solvent, to close their doors—precisely when the government is handing out billions of taxpayer dollars to keep them from closing.

If Biden wants to help low-wage workers, the best thing he can do is ensure that policies are in place that encourage economic growth. That was exactly what was happening when the pandemic hit.

The BLS continues: “The percentage of hourly paid workers earning the prevailing federal minimum wage or less declined from 2.7 percent in 2016 to 2.3 percent in 2017.”

We fully expect that trend would have continued through the end of the Trump administration IF the pandemic hadn’t hit. Biden’s task is to remove barriers to keeping businesses open, not add more.