Under UBI the government provides everyone, from the richest to the poorest, with a monthly check. Liberals see it as a way to reduce poverty and income inequality—and maybe “buy” some votes. But they are also warning that a coming technology explosion will push so many people out of work that UBI will become necessary.

In the chart below, we list in oder one group’s assessment of the top 10 most technologically advanced countries. The rankings will vary slightly on different lists. For example, on many lists the U.S. is first. And some lists will include a few different countries.

Next to the country we list its current unemployment rate. As you can see, there is no correlation between technology adoption and unemployment. In fact, many of the most technologically advanced countries are close to historic lows in unemployment, and well below what economists consider a “full employment” economy. 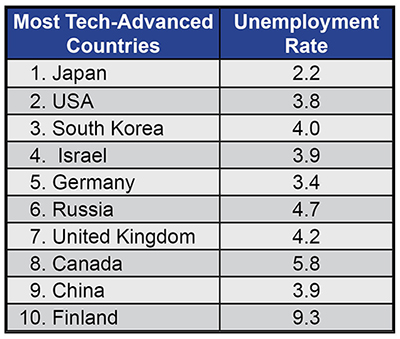 For example, when politicians push the minimum wage higher or force employers to provide very expensive health insurance (i.e., Obamacare), that can lead to employers replacing employees with technology.  But those lost jobs are the result of government mandates, not technology.

Indeed, we’d suggest that government is almost always the real culprit behind high unemployment. And the only cure for that problem isn’t universal basic income, but voters who elect limited-government candidates.