President Biden, call your office. Your whole reason for running for president has just been canceled.

A recent Gallup survey of the proper role of government has undermined progressives’ assertion that voters are begging for a big-spending entitlement state.  According to Gallup, “Currently, 52% say the government is doing too many things that should be left to individuals and businesses, while 43% want the government to do more to solve the country's problems.”

The Gallup survey couldn’t come at a worse time for Democrats—or a better time for the country—as they try to salvage their $3.5 trillion (now perhaps $1.5 trillion to $2 trillion) Build Back Better proposal.

Is the opposition to more government a recent fluke? Not according to Gallup.

“Last year marked only the second time in Gallup's 29-year trend that at least half of Americans endorsed an active role for the government on this item. The other pro-government response came in the weeks after the 9/11 terror attacks amid heightened concern about terrorism and a surge in trust in government.” [See the graph.] 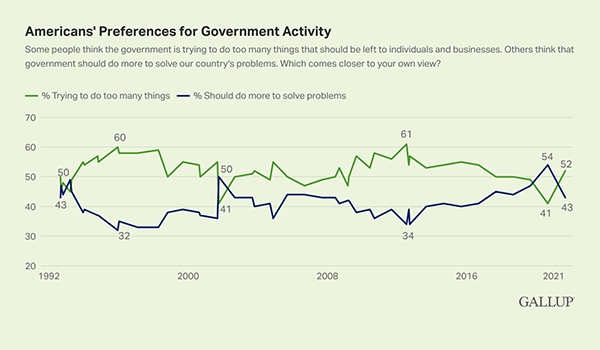 The desire for the government to do more understandably rose to 54 percent last year during the height of the pandemic and state lockdowns. But that was only the second time in nearly 30 years of taking the survey that the majority of respondents wanted a more activist government.

Now, the Democrats pushing their big-government agenda are reflecting the sentiment of most Democrats. According to Gallup, 78 percent of Democrats think the government should be doing more—only a small decline from 2020.

By contrast, 80 percent of Republicans currently think the government is doing too much.

But election outcomes are typically determined not by the party faithful, but by independents. And Gallup shows a nearly 20 percentage-point increase in independents who think the government is doing too much—from 38 percent in 2020 to 57 percent in 2021.

We don’t expect Democrats to be swayed by this survey. Progressives are hell-bent on passing the largest government-spending bill they can. And they are being warned by their allies that if they don’t pass a huge spending bill, they will be hammered in the 2022 election.

The Gallup survey indicates they may be hammered if they do.