The New York Times on Drugs

There appears to be no comparison so ludicrous that the political left won’t make it if it believes that allusion will stifle free markets and increase government control over the economy.

Enter the New York Times. In a February 24 editorial entitled “It’s Time for Pharmaceutical Companies to Have Their Tobacco Moment,” the editors recall when, 25 years ago, Congress “hauled before it” the top executives of tobacco companies to grill them about their practices.

Ironically, given the average age of members of Congress, it is very likely that the majority of them are regular users of one or more prescription drugs. And they would be outraged if they couldn’t get them, yet some legislative proposals could have that effect.

Before Congress starts pushing legislation, members should at least understand the numbers.

About 90 percent of the prescription drugs sold in the U.S. today are generics, most of which are very inexpensive.

I suspect that most members of Congress who take prescription drugs regularly pay only a few dollars for them—or they may even be free under some insurance plans.

In addition, drug expenditures increased only 0.4 percent in 2017, while overall health care expenditures grew by 3.9 percent.

To be sure, some drugs are very expensive. But let’s be fair: Seen the kind of prices charged by hospitals lately?

The most expensive drugs tend to be the newest, cutting-edge technologies. And creating them costs a lot of money. 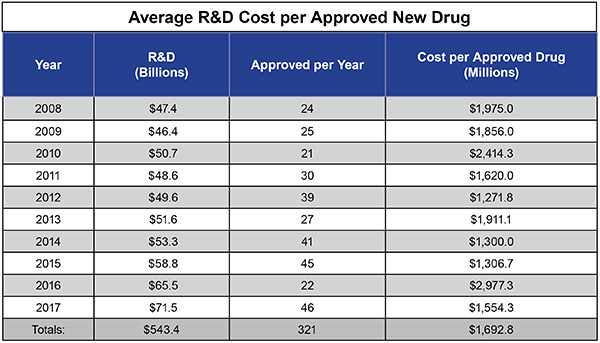 As the IPI graph shows, drug companies spend about $1.7 billion for each new FDA-approved drug. And that number does not include opportunity costs.

Moreover, for a decade or more drug companies have increasingly focused on rare diseases that affect fewer than 200,000 people—and often far fewer.

Thus, R&D spending is rising even as targeted patient populations are shrinking. Do the math. It becomes very expensive to produce drugs for life-threatening and debilitating diseases such as cancer, arthritis, diabetes and Alzheimer’s, to name a few. But we want the companies doing that research.

For various reasons, including perverse and misaligned economic incentives, extensive third-party payments, discounts and kickbacks, and the heavy hand of government, nearly all health care prices are distorted. It’s not just prescription drugs.

The solution is to get the government out of the health care business, but that is unlikely. More likely, members of Congress and the media will berate the drug companies and propose an even heavier hand of government.