One point of dissention between Democrats—or at least House Speaker Nancy Pelosi—and Republicans on a new coronavirus relief package has been over how much money, if any, should go to the states.

Pelosi wants a lot, Republicans not so much.

A just-announced proposal from a bi-partisan group of senators would provide about $900 billion total, with $160 billion of that targeted to state and local governments, according to the Washington Post.

Pelosi argues the pandemic and the subsequent shutdown of most states’ economies has been a major financial blow. Which is true, but perhaps not as bad as many think.

As this graph from the Federal Reserve Bank of St. Louis shows, state and local government tax receipts dropped in the second quarter of 2020, but began rising quickly in the third. 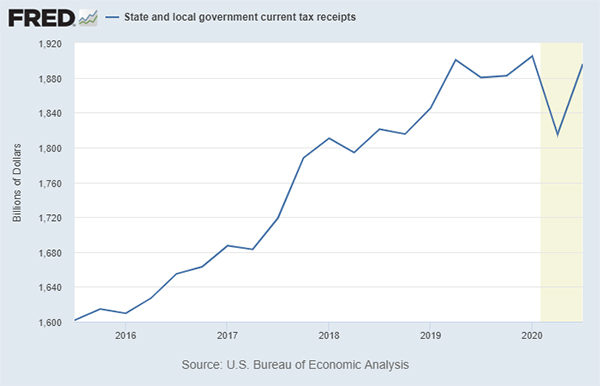 In the early stages of the pandemic, there was a lot of discussion about a V-shaped economic recovery. Well, at least with respect to state and local government tax receipts, it’s a perfect V.

Third quarter state and local revenue, $1.896 trillion, was a little less than the first quarter’s, $1.905 trillion. But 2020’s first quarter revenue was the highest in history.

For example, California Governor Gavin Newsom spent nearly $1 billion to buy N95 face masks from BYD, a Chinese company. However, the company struggled to get FDA approval for those masks—which it eventually received—proving to be a big embarrassment for the governor.

But you get the point: Expenses are up, but then so is state and local tax revenue.

We hope congressional negotiators keep this in mind as they try to agree on another coronavirus relief package. While there are many needs right now, it’s taxpayers who will have to fund Congress’s handouts.