An End to the Wussification of the Corporate CEO?

One of the major public policy challenges over the past nearly two decades is what we might call the “wussification” of the major corporate CEO. Tesla CEO Elon Musk’s recent actions may have initiated an end to that era.

Those of us involved in promoting free market economic polices, lite-touch regulation, low taxes and limited government have often found ourselves fighting alone. Major corporate CEOs—whose companies, with their hundreds or thousands of employees who benefit most from the policies we promote—often remained silent against the constant progressive assault on them and their companies.

And with some justification. CEOs don’t want to alienate customers on political or social issues. But progressives have been making that stance difficult.

Ironically, some of the most viciously attacked CEOs are sympathetic to the progressive causes of those attacking them with protest marches, media and social media blitzes, and efforts to shame them. Many of those CEOs believed that the only way to end the attacks was to agree to a number of progressives’ demands. Oh, and make a large contribution to their causes.

But Musk—who is probably more libertarian than anything else—decided to fight back, moving most of his operations out of Tax-ifornia and, most recently, challenging the limits imposed on speech by offering to buy Twitter.

And now former Amazon CEO Jeff Bezos is pushing back, which took progressives and the media by surprise. He is publicly challenging President Biden’s ludicrous assertion that raising corporate taxes and imposing higher taxes on the wealthy will lower inflation. 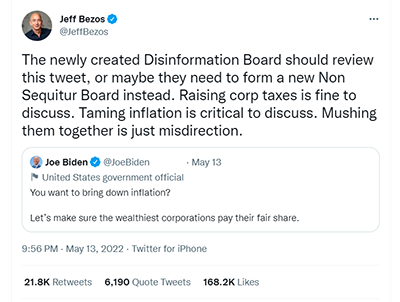 Like Musk, Bezos has felt progressives’ sting. Amazon was going to open a second headquarters in New York City—until Rep. Alexandria Ocasio-Cortez (D-NY) and other progressives attacked him and the company, in part for receiving tax breaks. Bezos and Amazon likely thought they were doing a great thing for New York City, creating thousands of new, high-paying jobs—and they were. After the progressive onslaught, the company recalculated and went to Arlington, Va., near Washington, D.C.

Progressives’ latest effort has been to push CEOs into promoting their cultural agenda. Disney’s CEO, Bob Chapek, recently tried to avoid taking that step, but flipped when his own progressive employees and some shareholders criticized him.

While most CEOs have little to no expertise in social policy, they can speak with authority about how high tax rates affect their companies’ business decisions, such as business investment, wages and benefits, and plans to expand or contract. And that’s what Bezos has done.

If these recent events indicate that major company CEOs are becoming more willing to come out of the shadows and publicly criticize the White House when it makes stupid economic claims and decisions, that would be a positive development. The last thing most companies—and economies—need is a wussy CEO.