President Joe Biden and Democrats claim they had to “go big” to get the pandemically challenged economy growing once again. But rather than boost economic growth, the $1.9 trillion “American Rescue Plan Act” more likely will give the economy a short-lived sugar-high, followed by years of tepid economic growth.

Just like what followed then-President Barack Obama’s “go big” $800 billion spending bill, the American Recovery and Reinvestment Act, that passed in February of 2009.

One reason for the likely muted long-term economic impact is government handouts will discourage many unemployed workers from reentering the workplace—at least for a while.

An economy needs workers to grow, and Biden just gave many unemployed workers “thousands” of economic reasons not to return to the workforce any time soon. 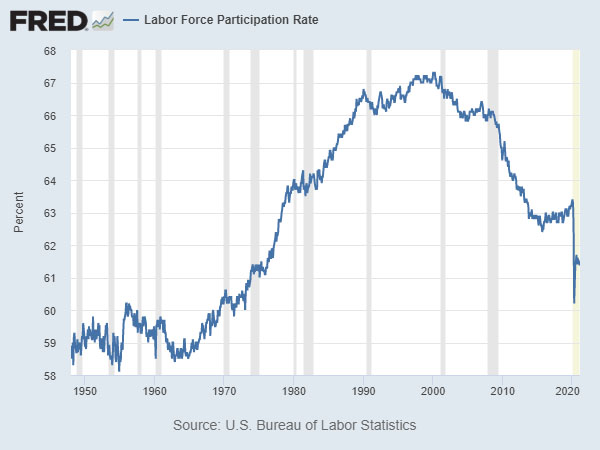 However, that decline accelerated rapidly with the Great Recession beginning in 2008, and continued much longer than one would have anticipated, only beginning a gradual increase in 2017—under President Trump’s pro-growth economic policies.

There are several reasons for the declining labor force during the Obama years, including the fact that the leading edge of the baby boomers turned 65.

But a primary reason was Obama’s economic policies. He did his best to undermine the welfare reform policies of the 1990s that encouraged so many people to enter or reenter the workforce. Biden’s spending blowout could have a similar negative labor force impact.

Increased unemployment benefits, $1,400 handouts, increased child tax credits, and Obamacare and Medicaid expansion, just to name some of the benefits, will certainly help many of the people hardest hit by the government-imposed lockdowns. But it will also dissuade many, perhaps millions, of able-bodied people from seeking work.

In fact, we saw a preview of that scenario last year when many laid-off workers discovered they could make more money on the government dole than on the employment role—and so were reluctant to return to work.

And here’s the sad irony: If millions of potential workers don’t return to work, thereby muting economic growth, look for Democrats to demand that government extend any temporary benefits and even increase them.

And they will justify that move by saying they didn’t go big enough, when in fact, they went way too big.