If there is one thing families and the economy—and the Biden administration, for that matter—don’t need it’s more inflation. Yet President Biden continues to promote inflationary policies. And the policy most likely to be enacted by executive fiat is the cancelation of some or all student loan debt.

The Biden administration has announced it is canceling $5.8 billion in student loan debt for those who attended the for-profit Corinthian Colleges. But that’s just the start. He is reportedly considering canceling up to $10,000 in debt per student—or maybe more—though he may make that available on a means-tested basis.

And, of course, progressives are demanding he cancel all student loan debt—about $1.75 trillion divided among 46 million borrowers.

Why would such a step be inflationary (not to mention unconstitutional)? Because it would put even more money in the hands of those consumers who had their debt canceled.

For years, and especially since the beginning of the pandemic, the federal government and the Federal Reserve Bank have been flooding the economy with money. According to Bankrate, “The Fed said in May that it’s going to soon start shrinking its massive near-$9 trillion bond portfolio.” It was about $4.17 trillion at the beginning of the pandemic in February 2020. (See the figure) 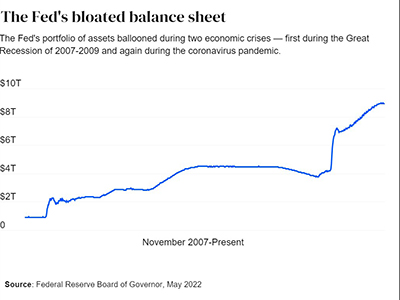 And then there’s Big-Spending Biden, whose biggest gripe has been his inability to convince Republicans and Senator Joe Manchin (D-WV) to spend even more money. As Politico points out, even a number of leading Democratic economists concede that Biden’s $1.9 trillion American Rescue Plan (ARP) poured gasoline on the inflation fire.

The ARP put subsidies into the hands of millions of Americans who didn’t need them at a time when supply chains were snarled. Student loan cancelation essentially does the same thing—putting extra money in people’s pockets.

Of course, millions of people with student loans haven’t been paying the principle or interest for the past two years. That’s because President Donald Trump implemented that policy at the beginning of the pandemic, when jobs and the economy tanked.

But we are well past that time, and yet Biden keeps extending the pause in student loan repayment—most recently until August 31—at a cost to U.S. taxpayers of about $4 billion a month.

If people with student loan debt know they have months before they have to begin repaying it, they may feel freer to spend the money on goods and services.

If they know they will never have to repay the debt—or a large part of it—they may feel emboldened to use their indirect subsidy to spend even more.

The better approach is to end the loan-repayment pause so that those who agreed to borrow and repay the money begin to do so again. Not only would that step reinforce the principle of personal responsibility, it would reduce the inflationary pressure caused by too much money chasing too few goods.