In Defense of Corporate Layoffs

Employee layoffs can be painful and disruptive for the affected employees and their families. But from an economic standpoint, they can be beneficial, especially if they are imposed as a type of preventive action, reducing a workforce in the face of a possible economic slowdown.

The news is full of stories of corporate layoffs, especially among large tech companies, forcing hundreds of thousands of employees into the ranks of the unemployed. Here’s a partial list, including some of the largest announced layoffs since the beginning of this year. 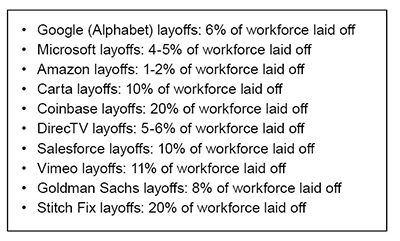 And there will likely be many more.

Of course, that list doesn’t include some of the largest layoff announcements from last fall, including Meta laying off 13 percent of its workforce, Twitter laying off 50 percent, and Snapchat cutting 20 percent. (See a full list here.)

But as disruptive as these layoffs are to individuals, there is a bright side.

First, many of the large tech companies concede they overhired during the pandemic and are now right-sizing their workforce for the emerging economy. Lean companies are more profitable than fat companies and are better able to navigate an economic downturn should one come.

Second, the unemployment rate is still very low: 3.5 percent last month. And employers are still scrambling to fill jobs, though that scramble has cooled a bit due to the Federal Reserve Bank’s interest rate hikes. So, most of the newly unemployed will likely be able to find a comparable job within a few months.

Third, as the newly unemployed transition from overstaffed to understaffed companies, they will boost the economy by putting capital to its most efficient use—again, helping companies survive a downturn.

Fourth—and most importantly—because progressive Democrats like Senators Bernie Sanders and Elizabeth Warren and the slew of House progressives haven’t been able to impose their socialist will on all parts of the economy (yet), companies still have the ability to adjust their workforces to meet the constraints of the economy and the needs of their customers.