Few U.S. industries are in greater need of innovative disruption than the health care system. And it looks like billionaire entrepreneur Mark Cuban may be just the disrupter to do it.

Cuban has created Mark Cuban Cost Plus Drug Company (MCCPDC), an online pharmacy that may be starting small but has big potential.

Cuban’s pharmacy is offering some 400 generic medications at the company’s cost plus 15 percent. Below are some examples of the savings, which you can find on the website. 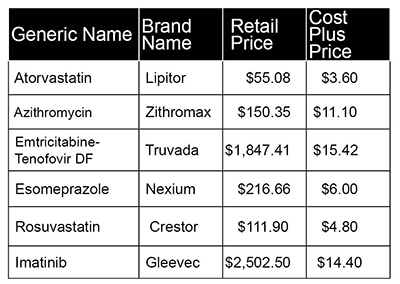 The website lists a medication, its retail price and the Cost Plus price. The savings are significant, in some cases thousands of dollars. And the reason Cuban can do that is, in part, by bypassing the current pharmacy benefits manager (PBM) process.

Cuban has tapped into something we at the Institute for Policy Innovation have been talking about for years.

Under the current system, a drug manufacturer makes a drug and sets the initial price. The manufacturer then negotiates with a PBM, the middleman, to distribute the drug. The PBM demands large discounts and/or rebates from the manufacturer, savings that the PBM claims it is passing on to patients. Except the PBM keeps a large portion of those savings for itself. And that becomes the rub.

Drug makers get hammered in the media and by politicians for charging too much money, when the fact is they are increasingly receiving a smaller and smaller share of the original list price.

Cuban’s Cost Plus Drugs model intends to negotiate directly with the drug makers and bypass the PBMs completely. The company also isn’t currently accepting insurance, but the prices are so much lower that they may be less than an insured person’s co-pay. In addition, handling insurance claims can add a level of cost-increasing bureaucracy.

Cost Plus has hit some bumps, apparently with trying to meet the demand. That’s understandable. But Cuban is building a facility in Dallas to manufacture some of the generic drugs onsite, which should help with the supply chain.

Cuban also plans to eventually include at least some brand name drugs and injectable biologics—two areas where the current costs can be prohibitive for many patients.

Other tech companies and innovators have tried to jump into the health care space, most have failed. But Mark Cuban is on to something. By eliminating the middleman, by posting the prices online, and by forgoing insurance (at least for now), he his encouraging patients to become value-conscious shoppers in the health care marketplace.

If that change infiltrates the rest of health care, it will fundamentally reshape the U.S. health care system.