Retirement Savings Accounts as Safe as Your Bank

One of President George W. Bush’s most important and controversial campaign proposals was to let workers place a portion of their Social Security payroll tax into Personal Retirement Accounts (PRAs). However, recent market volatility — the market having lost, by some estimates, about $4 trillion in value — has raised questions about whether the stock market is safe enough for retirement savings.

Virtually all proposals for shifting Social Security to a system of Personal Retirement Accounts have assumed some form of direct market investment. While numerous economists have clearly demonstrated that over time stock market losses are offset by much larger gains, PRA opponents are saying that any type of direct investment is a “risky scheme.”

How then are we to create a Personal Retirement Account option that will ensure a better return on workers’ savings than Social Security — thereby providing a better and more financially secure retirement — while avoiding the risk associated with the stock market? The answer is to move from an “ ;IRA model” to a “banking model,” or, to put it another way, from an “investing model” to a “savings model” — what we might call a Retirement Savings Account (RSA). [See the Illustration] 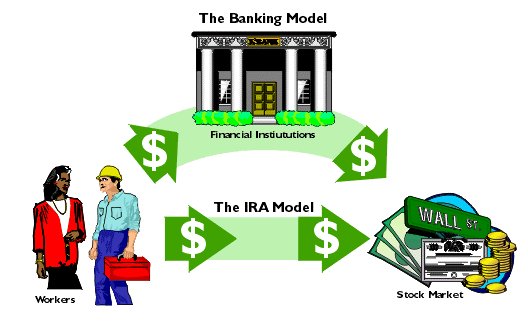 Twenty years ago, officials in Galveston County, Texas, wanted to explore the possibility of leaving the Social Security system (Congress ended that option in 1983).

In 1981 Galveston County employees voted by a margin of 72 percent to 28 percent to adopt the “Alternate Plan.” In 1982 Matagorda and Brazoria Counties followed suit.

Not Your Father’s Social Security.

Currently, there are about 2,740 full-time employees participating (plus thousands who have already retired). But while their payroll tax is about the same as those in traditional Social Security (12.4 percent), the benefits are very different.

Workers in Galveston contribute 9.7 percentage points of their payroll tax to retirement savings. The company that manages the Alternate Plan, First Financial Benefits of Houston, pools the money from all of the employees and loans it to a top-rated financial institution for a guaranteed interest rate. Those rates have varied from about 5 percent up to 15.5 percent, but average in the 7.5 percent to 8 percent range.

No Risk and Better Benefits.

Thus, employees bear virtually no risk; they get their interest whether the stock market goes up or down — and they have done so for 20 years. Nor are employees making investment decisions. Professional money managers do that for them. This process works much more like a bank than an investment brokerage. And, for all intents and purposes, the money is as safe as if it were in a bank.

Even without the risk, the Alternate Plan has proven to be very rewarding financially. If employees’ deposits only grow at 5 percent (most years they have had higher interest rates), they can expect to get about twice as much in retirement as they could expect from Social Security. According to First Financial Benefits:

Upon retirement, workers can take their money in a lump sum or purchase an annuity that will pay them a guaranteed income for life. It’s their money, so it’s their choice. Since the account and the funds therein actually belong to the employees, it becomes part of their estate regardless of when they die.

In addition, the Galveston Model includes a life insurance policy that pays three times a worker’s salary, between a minimum of $50,000 and a maximum of $150,000 — and the policy pays double if the worker dies accidentally. In the vast majority of cases, the insurance payout will greatly exceed Social Security’s survivors’ benefits.

And according to the U.S. General Accounting Office (GAO), workers in the Alternate Plan can expect to draw significantly more money than those who must rely on Social Security disability benefits. For example:

A Model for a National Plan?

Consider the competition that would ensue from the banking model. RSAs would be large, ill-liquid pools of money — several hundreds of thousands of dollars for older workers — that would be extremely appealing to financial institutions, which would offer the highest possible interest rate to attract accounts.

And there likely would be minimal administrative costs imposed on RSAs, just as there are no fees on most checking accounts that maintain a minimum balance. Banks are willing to waive those fees in order to have the customers and their money.

What Would Be the Role of Government?

Banks, insurers and other types of financial institutions operate under a government regulatory framework meant to protect consumers and their money. A system of RSAs would likely operate under a similar framework. That role should include setting basic minimums on insurance coverage. It might also set certain institutional minimums such as reserve requirements, and it might require certain accounting standards and other process-oriented minimums. Finally, the government would likely have to guarantee deposits, just as it does for banks through the Federal Deposit Insurance Corporation (FDIC) program.

For several years the debate over reforming Social Security has centered on an IRA Model, in which people’s contributions rise or fall with the stock market — or even individual stocks. That model works in other countries and it can work here. However, stock market volatility and political posturing may make that option politically impossible.

Unless proponents of a personal account option find a plan that addresses the “risky scheme” demagoguery that will be hurled at them, they will never get to a serious debate over those accounts. A model that is as safe as your bank may be the only viable political option.