Most economists disagree. They believe a trade deficit is relatively meaningless. Think of it on the individual level. As consumers, we buy lots of products and services from vendors—grocery stores, gas stations, department stores, etc.—either in person or online. We give them money and very few of them buy what we as individual workers produce.

Indeed, one measure of how well we as individuals are doing financially is how much we spend on goods and services produced by others.

In other words, as families we have a trade deficit with lots of businesses, and no one cares as long as we have the income—i.e., in economic terms, create enough wealth—to pay those bills.

The same is true for countries. Those doing well tend to import more because they have the wealth to buy more goods and services.

That’s why the trade deficit tends to rise when a country’s economy is strong and decline when an economy is in recession.

As this St. Louis Federal Reserve Bank graph shows, the U.S. trade deficit declined significantly during the Great Recession, from about $60 billion in November 2007 to $26 billion in May 2009. (Note: a falling line indicates an increase in the deficit.) 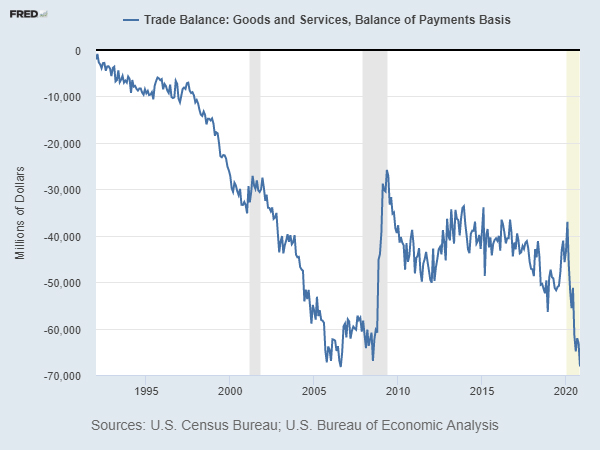 That decline wasn’t because the United States was “winning,” but because so many Americans were in financial distress and thus reduced their spending. However, the trade deficit grew after the recession came to an end.

The trade deficit moved mostly sideways through the Obama years and then began to grow when Trump entered office in January 2017.

There was a brief period toward the end of 2019 when the trade deficit decreased, but then it grew dramatically as we entered the pandemic in February 2020.

That pandemic trade-deficit growth was important to the U.S. economy and highlights the importance of having access to foreign-made goods and services.

As states locked down, domestic production and distribution of many products declined immediately—hence, the empty store shelves. So consumers—whether individuals, businesses and even states—began buying from other countries.

And no one seemed to care about the growing trade deficit, which hit a 14-year high last November.

The Biden administration will likely return to the more traditional economic view of trade deficits, which, if Biden’s tax-and-spend policies don’t push us into a recession, will likely also grow if the economy does.