One of the mysteries plaguing the economy and puzzling economists has been the pandemic-related worker shortage. Once states began reopening and people began returning to work, it quickly became apparent there was a worker shortage, exacerbating the supply chain snarls and making it difficult for millions of companies to fully resume operations.

The question was why? Was it generous federal handouts to workers, the unemployed and families with children? No doubt, but most of those additional benefits have ended, compelling many to return to work.

Was it grown children moving in with parents and thereby reducing income needs? Probably, at least in part.

Was it seniors aged 65 and over and the near-elderly deciding it was time to retire? The answer, according to a new paper from the Federal Reserve Bank, is yes. Those retiring account for almost all of decline in the labor force participation rate.

In the new paper, “The Great Retirement Boom”: The Pandemic-Era Surge in Retirements and Implications for Future Labor Force Participation, economists Joshua Montes, Christopher Smith, and Juliana Dajon write, “As of October 2022, the retired share of the U.S. population was nearly 1½ percentage points above its pre-pandemic level (after adjusting for updated population controls to the Current Population Survey), accounting for nearly all of the shortfall in the labor force participation rate.” 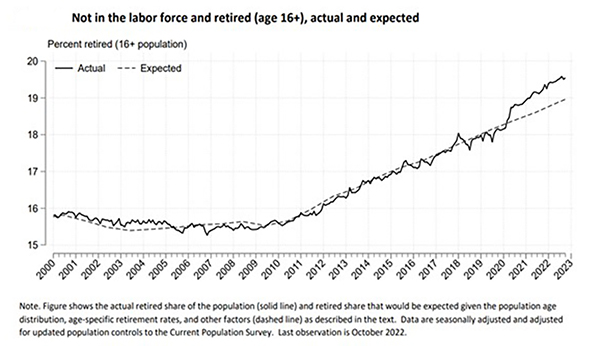 In February 2020, the start of the pandemic, the labor force participation rate was 63.3 percent—the highest it had been in about seven years, but far below its peak of 67.3 percent 20 years earlier, in February 2000.

The labor force participation rate is the percentage of the civilian noninstitutional* population 16 years and older who are working or actively looking for work out of the total number of people available to work.

The Fed paper notes that the retirement rate was gradually increasing even before the pandemic, in part because of the aging baby boomers. Even so, “We show that: more than half of the increase in the retired share are ‘excess retirements’ that would likely not have occurred in the absence of the pandemic;” and that “excess retirements have been largest among the college-educated and whites.”

But why the excess in retirements? The paper suggests that health concerns, especially for older people, may have played an important factor.

And while the paper generally dismisses the notion that the stock market’s years-long bull run was a factor, I think that’s incorrect. As Gallup shows, owning stocks is highly correlated with higher education, higher incomes, and non-Hispanic whites—the lion’s share of the excess retirements.

Of course, those retirees who did well in the stock market up to, say, January 2022 may now be second guessing their retirement decisions after 2022’s market slide. Who knows, maybe we’ll see a surge of 65+ workers reentering the workforce just as the Biden-induced recession begins.

* “Persons 16 years of age and older residing in the 50 states and the District of Columbia, who are not inmates of institutions (e.g., penal and mental facilities, homes for the aged), and who are not on active duty in the Armed Forces.” Department of Labor