Wait, 'PAYGO' Is Still a Thing? Who Knew?

House Speaker Nancy Pelosi has begun discussing the Democrats’ spending priorities post Jan. 20, when they will control both the House and Senate and the White House. They plan to ramp up federal spending—a lot.

In those discussions she brought up the “PAYGO” limitation and Democrats’ efforts to weaken it, which caused me to pause: Is PAYGO still a thing? Apparently, the answer is yes.

You might be forgiven for not knowing what PAYGO means. It stands for “pay as you go” and was adopted as a rule by Democrats when they regained control of the House in January 2007. The purpose of PAYGO is to impose fiscal responsibility on the federal government. No, really!

The House pay-as-you-go (PAYGO) rule is generally intended to discourage or prevent Congress from taking certain legislative action that would increase the deficit. It prohibits the consideration of direct spending and revenue legislation that is projected to increase the deficit over either a 6-year or an 11-year period. In effect, the rule requires legislation that includes provisions projected to increase direct spending or reduce revenues to also include offsetting provisions over the two specified periods.

In short, the rule means that the “cost” of any new federal spending or tax cuts must be offset by one or more provisions. It’s an effort to force budget neutrality so as not to increase federal debt.

Now, a reasonable person looking at this St. Louis Federal Reserve Bank graph of federal debt might wonder just how successful PAYGO has been. 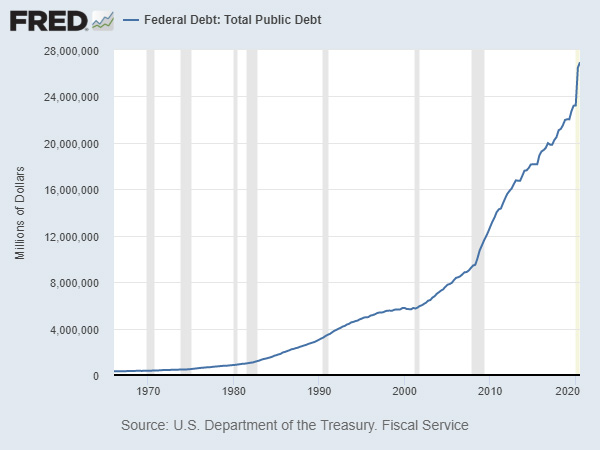 Notice that federal debt began rising at a much faster rate shortly after Democrats adopted the PAYGO rule in 2007. If PAYGO is intended to impose fiscal responsibility on Congress, it’s doing a darn poor job.

So why has PAYGO failed? In essence, the rule has more holes than a sieve.

The original rule, as is the case with the current rule, could be waived by a special rule reported by the House Rules Committee and agreed to by the House by majority vote, by considering the legislation under the suspension of the rules procedures, or by unanimous consent. In addition, the original rule did not count any direct spending contained in an appropriations act; that is, new direct spending could be provided in an appropriations act without violating the PAYGO rule, even though it increased the deficit.

All the House has to do to bypass PAYGO restrictions is claim an exemption for specified spending measures, which Democrats intend to do with additional pandemic relief spending—much to the relief of the party’s far-left members.

Thus, while PAYGO was supposed to impose fiscal discipline on Congress, it has become little more than an annoying speedbump to massive federal spending increases. If you think federal debt rose at unacceptably high rates under a Republican-led Congress—and it has—just look at the chart above in two years.