What if You Held an International Climate Summit and Nobody Cared?

News coverage of—and speculation about—the U.S. midterm elections has been dominating the news cycle for weeks. The result is that there has been relatively little coverage of COP 27, which is taking place in Egypt.

And that’s probably fine, because even though environmental activists and the media think climate change and global efforts to fight it is the most important challenge facing the world, it’s not clear many others do. That’s because actions speak much louder than words.

COP 27 stands for the 27th Conference of the Parties to the United Nations Framework Convention on Climate Change. It began Sunday, November 6, and will end on November 18.

We can likely predict COP 27’s results even though it has just started. It will conclude by saying we are almost at the point of no return and that the need to address climate change, by cutting greenhouse gas emissions, is more important than ever. Many of the developed economies will promise to do even more, but then return home and do even less.

That’s been the pattern for decades. And it’s why it’s more revealing to see what countries do rather than what they say.

Take the push for clean energy. If countries were really serious about reducing greenhouse gas emissions, they would phase out coal-fired electricity generating plants and transition to cleaner-burning natural gas and, better yet, nuclear generation. And the United States has been taking those steps, though much of that change is the result of market forces rather than government forces.

But as the Bloomberg graph shows, several countries, especially China and India, are vastly expanding coal plants, and don’t even plan to max out carbon emissions for years. And yet China, India, Indonesia, et al, will join the global chorus calling for countries to do more—by which they mean other countries. 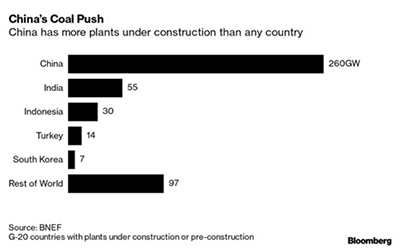 Even President Joe Biden, who recently revealed he wants to end coal usage in the United States, has been on his knees begging the Saudis and OPEC+ to produce more oil—at least until after the midterm elections. And he’s been negotiating with the corrupt, repressive, socialist strongman Nicolás Maduro of Venezuela to help that failed country pump more.

That discrepancy between what the largest emitters say and what they actually do tells the real story.