Note to Media: Not All Cold Temperatures Are Due to Climate Change

Nearly every weather-related national media report I’ve heard or read over the past week stressed one key point: The recent cold weather that froze Texas is just one more example of extreme weather events caused by climate change.

To be sure, the extremely cold weather that blanketed Texas beginning Valentine’s Day and lasting about five days was unusual—just not unprecedented.

The official temperature in the Dallas-Fort Worth area dropped to –2 degrees Tuesday morning, February 16.

But according to the National Weather Service, Dallas-Fort Worth experienced -8 degrees in … wait for it … 1899. That was long before fossil-fuel emissions from cars, airplanes and electricity generation were putting large quantities of carbon dioxide into the atmosphere.

The National Weather Service goes on to say:

The lowest temperature ever recorded in the state [Texas] occurred at Tulia in Swisher County in the extreme southern Texas Panhandle. The thermometer dropped to 23 degrees below zero. However, there were unofficial reports that were even colder. Low temperatures of 30 degrees below zero were measured that night at Wolf Creek and at a site southeast of Perryton, both in Ochiltree County in the northern panhandle. This cold air spread throughout the state with reports of a thin layer of ice coating most of Galveston Bay.

The National Weather Service helpfully lists the coldest recorded nights in 17 of Texas’s largest cities. Of those 17 record lows, only four have occurred since 1950.  Here are 10 of the coldest nights. 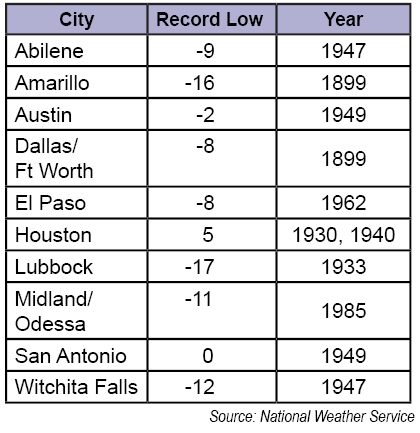 Cold weather has been invading Texas long before the media became obsessed with climate change.

The earth has been on a gradual warming trend since the last ice age, which is why we aren’t in an ice age any more. And humans may very well be exacerbating that warming trend.

But severely cold weather happens in Texas. It isn’t common, but it does happen—and long before news reports and the left blamed everything that occurs on climate change.