Five Turning Points in the Quest for US Energy Independence

Since the Arab Oil Embargo of 1973, Congress has embraced the goal of U.S. energy independence. Today, the United States is on the verge of achieving not just energy independence, but energy dominance—but not because of taxpayer-provided subsidies to alternative and renewable energies. Rather, new drilling innovations and technologies have made the U.S. the world’s largest producer of crude oil and natural gas. This paper identifies five turning points that made that achievement possible.

The United States is about to achieve a goal almost unimaginable just a few years ago: energy independence.

That reversal of fortunes is a result of engineering and technology, which has led to stable energy prices for consumers even in the midst of Middle East turmoil, a boost in manufacturing, high-paying jobs, a reduction in the balance-of-payments and a thriving economy.

For the first time in many Americans’ lifetimes, the country could soon no longer be dependent on foreign sources for its energy needs. Indeed, in the near future many other countries will likely be dependent on energy exports from the United States.

This paper identifies five turning points that have led to this remarkable development.

Geophysicist Marion King Hubbert proposed his “peak theory” in 1956.[1] The idea was that global oil production would peak around 1970, whereupon production would begin to decline, making it more difficult and more costly to extract crude oil in the future. [See Figure 1] 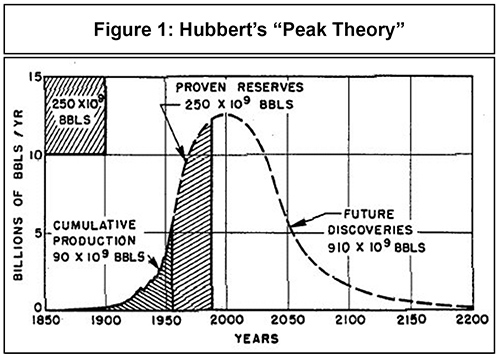 With respect to U.S. crude oil production, Hubbert was correct. It peaked—or so we thought—in 1970. [See Figure 2] And peak natural gas followed in 1973. What brought home Hubbert’s finding to millions of Americans was the Arab Oil Embargo of 1973, when several Middle East countries imposed a crude oil embargo to punish the United States for its support of Israel. 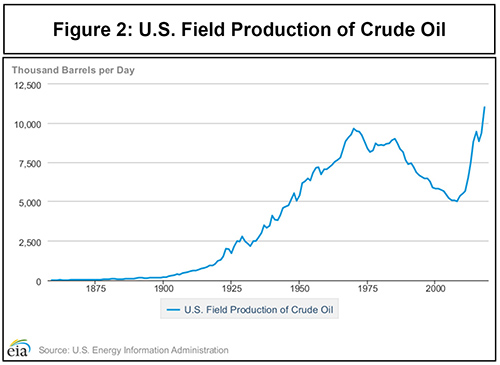 The resulting high gasoline prices and long gas-pump waiting lines that consumers occasionally faced over the next several years angered the public and Congress, which decided to act, taking us to the second major turning point.

High gasoline prices and long waiting lines encouraged Congress to come up with a solution, passing a string of bills intended to move the country toward energy independence.  Among them:

Thus Congress became heavily involved in trying to ensure that the U.S. could achieve energy independence at some point in the future. And that effort continues to this day.

Congress provides a range of subsidies and tax breaks for alternative energy efforts. The claim is often made that the federal government heavily subsidizes fossil fuels. But while fossil fuels do receive some tax breaks, most of them are widely available to other manufacturing industries.

By contrast, the Congressional Research Service (CRS) has shown in a March 2019 report that the large majority of energy-related tax breaks—what CRS refers to as “lost revenue”—goes to renewable energy projects.[2]

Moreover, as CRS points out, many of the estimated $4.6 billion in tax incentives claimed by the oil and gas industry are widely available to other industries. That is, they aren’t exclusive to oil and gas.

Note: These numbers are only referring to tax breaks, not the billions of dollars handed out every year by Washington and state and local governments in direct subsidies and mandates to renewable and alternative fuels.

Renewable energy has become an important component for electricity generation and will likely provide a growing share in the future. But it will be a long time before it is able to replace fossil fuels, regardless of what environmental activists claim.

Fortunately, the country is on the verge of achieving the goal of energy independence—though not because of Congress’s efforts.

Hydraulic fracturing, or “fracking,” is not new; it’s been around for decades.

However, technological improvements and the insight to combine fracking with horizontal drilling in the early 2000s created a gusher of opportunities, especially in shale formations that are not productive using traditional methods.

The application of these technologies to shale and tight sandstone formations, which we know contain substantial amounts of oil and natural gas but lack the permeability to produce naturally, have opened the drilling doors to many largely untapped regions. Crude oil and natural gas production increased immediately and has continued to climb. 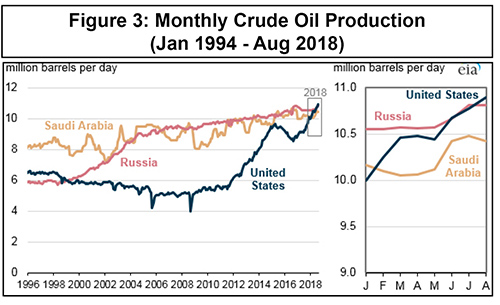 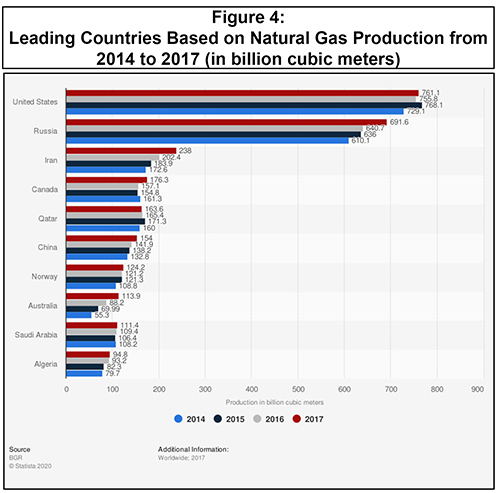 The importance of this transformation cannot be overstated. Natural gas, which releases about half the carbon of coal, is replacing coal as the energy source of choice in powering electricity generation. The recent EIA announcement that energy-related CO2 emissions are expected to decline through 2021, and even further, is a direct result of the transition from coal to gas.[5] 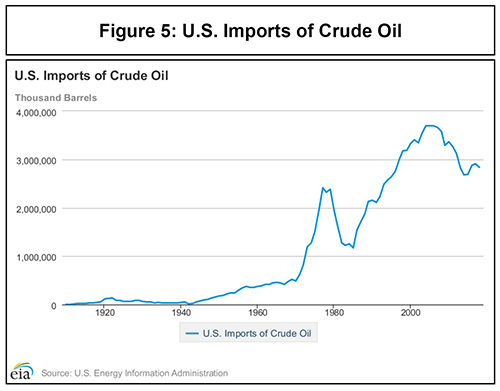 The generally low price of crude oil these days—a direct result of the U.S. increasing supply—and reduction in the need for foreign oil has produced a positive impact on the U.S. balance of trade. But so has the ability to export fossil fuels, which takes us to the fourth turning point.

For decades U.S. oil companies were prohibited from exporting crude oil—a legacy of the Arab Oil Embargo. They could export refined oil and certain petroleum liquids, but not crude oil.

That changed with the 2015 budget deal. In exchange for extending solar and wind-power subsidies, the prohibition against oil exports was eliminated.

Natural gas, by contrast, never had an export ban. But gas has to be liquefied—by cooling it to about -260°F—to ship, a costly process that didn’t make much sense given U.S. demand.

However, once the shale boom began dramatically increasing natural gas supplies and decreasing prices, some companies thought they could export profitably and petitioned the federal government to allow them to build liquefied natural gas (LNG) terminals. The Obama administration didn’t stop the process, but people in the industry believe the administration slow-walked such applications to discourage more fossil fuel production.

Why would companies export oil if the U.S. is still a net importer? There are several reasons.  Oil must be refined, and not all oil is the same. Canadian tar sands oil is very thick and requires specialized refineries that are capable of processing it, like many on the Gulf Coast. Other oil, like West Texas Intermediate, is very light and needs less refining.

But perhaps the most important reason for allowing exports is it creates a global market for U.S. crude oil and natural gas. [See Figures 6 and 7] 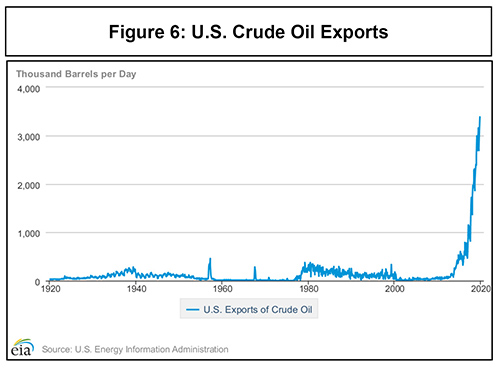 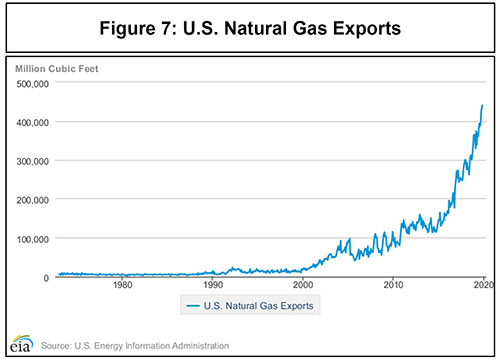 A country’s oil needs vary based on the strength of the economy, weather conditions, crude prices and other factors. If the U.S. needs less oil, producers have to reduce production or store the excess until demand picks up. That excess supply often causes the price to tumble.

As a global market for U.S. oil develops, foreign demand means there may be a market for oil even if the U.S. economy cools.  Thus producers have an incentive to keep production high, which means that prices will, other things being equal, remain low.

While the goal of Congress in passing a multitude of alternative energy subsidies and tax breaks was to move the country toward energy independence, President Trump has announced a more ambitious goal: “achieving energy dominance.” Energy is much too important to the U.S. economy and national security to be held captive to foreign governments that may want to punish us.

The U.S. is approaching energy independence—the day when the country produces more energy than it uses. The EIA recently reported, “In November 2019, the United States exported 772,000 barrels per day (b/d) more petroleum (crude oil and petroleum products) than it imported, marking the third consecutive month in which the United States was a net petroleum exporter.”[7] That is a fact almost no one would have imagined just a few years ago.

It is, however, harder to know if and when the U.S. has reached energy dominance. U.S. energy production and policies clearly have a major global impact—and may have as much or more influence over world energy markets than OPEC did just a few decades ago. And that’s good news. Few things are more important to a growing, dynamic economy than energy.

The United States is on the verge of achieving a goal Congress set nearly 50 years ago: energy independence.

While the currently favored renewable energy sources, wind and solar power, play a small but growing role in electricity generation, by themselves they cannot meet the needs of the world’s largest economy.  And it will likely be decades before they can.

Clean energy may be the power of the future, but it cannot power the present—regardless of what the environmentalists claim.

Increased energy production and improved energy efficiency are about to make us energy independent. That means a stronger economy and enhanced security, and low and stable energy prices for U.S. consumers.

Merrill Matthews, Ph.D., is a resident scholar with the Institute for Policy Innovation. He is a health policy and energy policy expert and weekly contributor at TheHill.com. He also serves as Vice Chairman of the Texas Advisory Committee of the U.S. Commission on Civil Rights.

Dr. Matthews is a past president of the Health Economics Roundtable for the National Association for Business Economics, the largest trade association of business economists, and co-author of On the Edge: America Faces the Entitlements Cliff, published by IPI.

He has published and spoken widely on energy policy issues, and how the 15-year-old U.S. energy boom has benefited the U.S. economy, lowered carbon emissions and enhanced energy independence and national security, for both the U.S. and its allies.