Democratic presidential frontrunner Bernie Sanders has made “Medicare for All” a hallmark of his campaign.

Of course, the name is a misnomer. His plan does not put everyone in the current Medicare program. It eliminates Medicare as we know it, replacing it with a single-payer, government-run health care system.

Sanders likes to claim a government-run system is more efficient than private sector health care. However, he never mentions the rampant fraud that occurs in Medicare and Medicaid.

The U.S. Department of Health and Human Services’ Office of Inspector General posts the 10 “OIG Most Wanted Fugitives” for health care fraud, primarily Medicare and Medicaid. While these are the top 10, the OIG says there’s 170 health care fraud fugitives on its list. 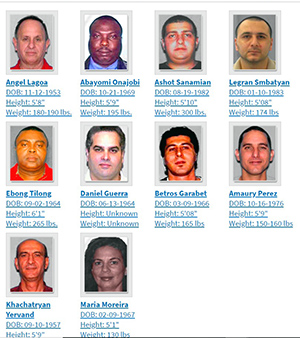 HHS also lists some of its recently captured Medicare and Medicaid crooks. Let’s call them “Medi-crooks.”

Most Wanted Fugitive David Kim was apprehended in Ho Chi Minh City, Vietnam. Kim was indicted in October 2015 on charges of healthcare fraud, illegal remunerations, and aggravated identity theft. Investigators believe that Kim was involved in a scheme to fraudulently bill Medicare approximately $15.2 million for physical therapy services that were either not reimbursable or were not fully provided.

Actually, $15.2 million is chump change when it comes to Medicare and Medicaid fraud.

In a 2009 60 Minutes segment, reporter Steve Kroft claims Medicare fraud, at about $60 billion a year, has become “one of, if not the most profitable crimes in America.”

Kroft interviews one of the scammers who was caught and put in prison. He told Kroft he made about $20 million defrauding Medicare. He explains he never actually sold any medical equipment or services; just sent fake bills to Medicare. “Like taking candy from a baby,” he says.

One law enforcement official explains that Medicare fraud has replaced selling cocaine as the organized crime of choice in southern Florida. The money’s easier, there’s no turf war and, if caught, the punishment is lighter.

Does anyone besides Bernie Sanders really believe that fraud will actually decline when 325 million Americans, rather than the roughly 100 million seniors and the poor, are in government-run health care?