Well, gotta say I didn’t see this coming: Conservative-leaning people trapped in a blue state want out. But instead of moving to a red state, they want a red state to move to them.

I first started writing about the blue-state exodus nine years ago. The theme was that people living in blue states would become so fed up with the high taxes, burdensome regulations and, more recently, the government-imposed wokeness that they would either (1) vote the scoundrels out and turn their states red, or (2) move to a red state.

We saw the first response in the dramatic switch in state legislatures beginning around 2010.  According to Ballotpedia’s assessment of the 88 state legislatures holding elections in 2010: “52 of the 88 chambers, or nearly 60% of them, had a Democratic majority, while 33 of them had a Republican majority.”

By 2015, 69 out of 99 state legislative bodies—essentially 70 percent—were controlled by Republicans.

A recent Census Bureau report has demonstrated the second point—moving to a red state. An assessment of the likely shift in congressional representation after the 2020 Census finds Texas gaining three House seats and Florida two. California is predicted to lose one congressional seat for the first time in history.

But here’s the third option: The good citizens of the rural parts of bright-blue Oregon would like to live in a low-tax, freedom-loving red state, but don’t want to move to one.

Their solution? Drag the state line of Idaho westward to include a large chunk of Oregon, and even part of northern California, which they want to call “Greater Idaho.” 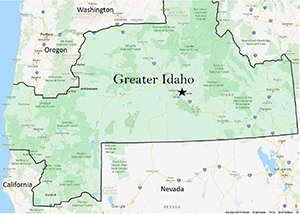 Supporters have started a movement—well, “movement” may be a little overstated—called “Move Oregon's Border for a Greater Idaho.”

Of course, the effort faces some challenges. The biggest challenge would likely come from Salem. A Greater Idaho would make what’s left of Oregon really small. That would mean Salem would lose power and have less tax revenue to redistribute to all its liberal causes.

The second challenge is the U.S. Constitution. Article IV, Section 3 asserts that no state can “be formed by the Junction of two or more States, or Parts of States, without the Consent of the Legislatures of the States concerned as well as the Congress.”

A third problem: other states might want to jump on the bandwagon. Californians living in the southeastern part of the state might want to drag the Arizona state line west to include them. The good citizens of southern Illinois might want to be included in Indiana, or Kentucky, or Missouri—or any other state—if that meant fleeing Chicago.

But for now it's Oregon citizens who want to live in the freedom-loving atmosphere of a red state like Idaho. The point isn’t to make Idaho great again, it’s to make it a Greater Idaho.